This first monastery at Bredon was dedicated to St Peter, and in 780 Offa, King of Mercia, endowed lands in Worcestershire for its upkeep. We must assume the destruction and burning of Bredon Monastery by the Danes on their journey up the River Avon sometime immediately after the year 841. The monks were either slain or deported, and the monastery valuables certainly plundered.

The Normans began the present church, around 1180, and work continued until the middle of the 13th century. It seems possible that stonemasons who were at that time working on the great Abbey of Tewkesbury were called in to lend a hand in the construction of Bredon Church. Certainly the two external turrets at the west end and those at Tewkesbury Abbey have a marked resemblance. 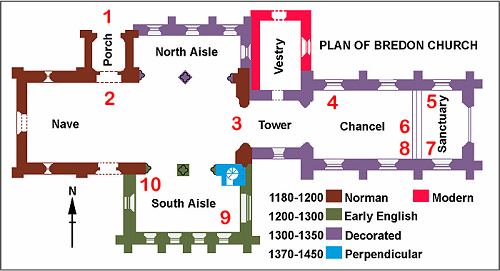 Here are some of the interesting features in St. Giles. Click on any of the images to see a larger version of the picture.